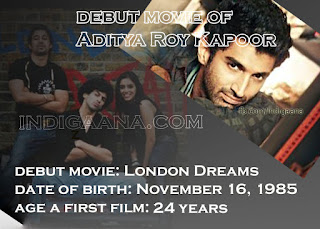 Aditya Roy Kapur  is an Indian film actor who works in Hindi films. After a brief career as a video jockey on Channel V, he made his film debut with a minor role in London Dreams  and followed it by playing supporting roles in Action Replayy  and Guzaarish . He rose to prominence in 2013 by playing the male lead in the highly successful romantic drama Aashiqui 2. Also in 2013, he played a supporting role in the coming-of-age romantic comedy Yeh Jawaani Hai Deewani, which ranks among the highest-grossing Bollywood films of all-time.